Do solar power banks even work?

Solar power banks are portable, powerful, and affordable tools that keep your devices charged and ready to go. They’re essentially mini-solar power generators capable of harnessing the power of the sun to keep you going, even when you’re on the go. Instead of having to hunt down an outlet, you’re simply able to plug your phone into the power bank. But are the added conveniences of extra charging power worth the cost of a solar bank?


How do solar power banks work?

First let’s talk about the basics of how solar energy is generated. Photovoltaic solar panels are made up of many solar cells made of silicon. When sunlight hits the panels, they create an electric current. Panels have both a positive and a negative layer, which creates an electric field.

The current collected by solar panels gets stored energy in the battery pack. This means you just need to set your power bank out in the sunlight in order to have it ready for your smartphone, tablet, or other small device in need of charging.

What can I charge with a solar power bank?

You can typically charge devices that can be charged via usb outlets with a solar power bank. Both the Renogy 10,000mAh and 15,000mAH solar panel charger includes two USB ports to keep your phone and other essential electronics full of juice when you are off the grid. You can easily recharge the battery pack by putting it out in direct sunlight or via its 2A input port. Each charging port of this solar battery pack can charge your devices at speed up to 2.1A. This is equal to a total of 37Wh power for charging your phone and tablet simultaneously.

Who should purchase a solar power bank?


How do I charge a solar power bank?

To charge the device, simply leave the power bank out in the sunlight. Alternatively, you can charge the battery via a wall outlet. Although dependent on the intensity of the sunlight, a 15,000 mAH solar power bank can take about two hours to charge half of the battery. We recommend just putting your solar power bank out in the sun for the day and leave it to charge. After a full day of sun, your battery should be well-charged, and you’ll be able to plug in and recharge your phone.

How do I charge my phone with a solar power bank?

The process of using a solar power bank is very easy. Just plug your device into one of the inputs on the power bank and you can start collecting energy from the device. The Renogy 10,000mAh and 15,000mAH solar panel charger include two USB ports so you can simultaneously charge two devices.


How do I choose between different solar power banks?

The main difference between Renogy solar power banks is the battery capacity or amount of energy stored. Battery capacity is usually measured in mAh, or ampere-hour. The higher the mAh, the more you’ll be able to charge on a full battery. As a general rule, power banks between 3,000 and 10,000 mAh can charge phones and tables. Power banks more than 10,000 can charge phones, tablets, laptops, and other small electronics.

As another general rule of thumb, you should opt for a power bank that is three times the size of your smartphone battery. For example, an Apple iPhone 11 Pro Max has a 3,046 mAh battery. By following the 3x rule, a 10,000 mAh should be suitable to meet your needs.

How many times can I charge my phone with a power bank?

This depends on the size of your phone battery and the particular technology of your phone. The 10,000MAH charger can charge an iPad once, an iPhone X three times, or a galaxy s9 two times. 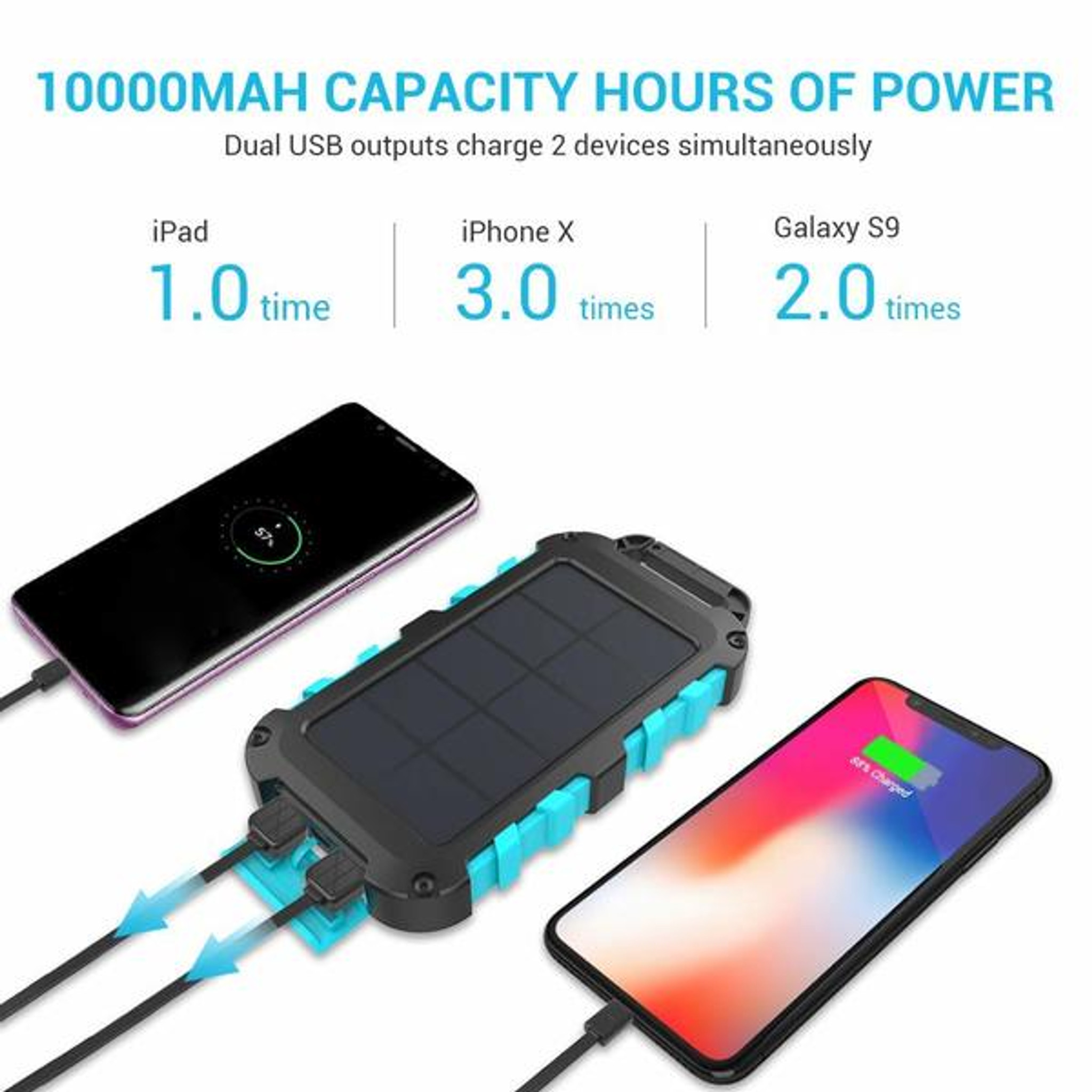 How long does it take to charge my phone with a power bank?

What are the other noteworthy features of Renogy solar power banks?

Renogy solar power banks are built for adventures of all sizes and are water-resistant, shock-resistant, and dust-proof. You can also attach the compact battery to your backpack with the included carabiner and you’ll always have the power of the solar bank easily at hand. There’s also a built-in-LED light, making them perfect for emergency situations.


Are they an affordable charging solution?


What’s the verdict? Are they worth it?

Portable solar power banks, though not the solution for achieving endless battery life, makes it much easier to keep your devices charged when you’re on-the-go or off-grid. Because of their capacity to charge smartphones multiple times on one charge, they are a great charging solution if you’re on a backpacking, bike touring, or camping trip without steady access to an electric outlet, but want to keep your devices charged. The Renogy 10,000mAh and 15,000mAH solar panel charger are both reliable, easy-to-use, and affordable options for staying powered up while you’re on-the-go.

Your cart is empty.